Women in Parliament: A global perspective on Australia’s lazy lateness 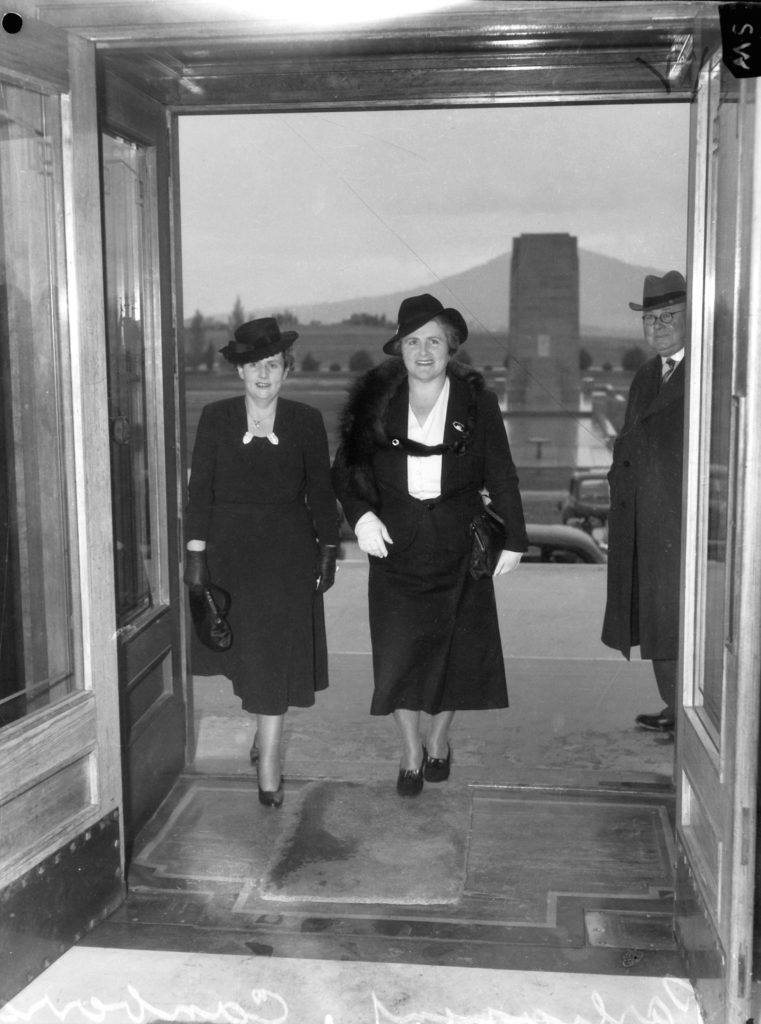 Dorothy Tangney and Enid Lyons walk through the doors of Parliament House in 1943 as its first female politicians. Photo: Australian War Memorial.

When Enid Lyons and Dorothy Tangney stepped over the threshold into Parliament House in 1943 they were late. Not by hours, but decades. Despite an ‘early adopter’ advantage, Australia dragged its feet badly when it came to electing women to federal parliament. It took 41 years after winning the vote for women to finally win a seat: Lyons in the House of Representatives, and Tangney in the Senate.

Australia likes to boast that in 1902 it became the first nation in the world to give women the right to vote and run for federal parliament. But, strictly speaking, this is not correct. Indigenous women were excluded from that right until 1962. New Zealand, while still a British colony, pipped Australia to the post on suffrage by granting women the vote in 1893, but withheld the right to stand for parliament until 1919.

However, the small colony of South Australia led the way by granting women both the vote and the right to run as early as 1894. West Australia followed five years later. But it took until 1921 for Edith Cowen, who won a seat in the Western Australian Legislative Assembly, to become the first woman elected to any Australian parliament. A total of 11 women were elected to State parliaments before high heels finally dented the green and red carpets of federal parliament.

“When addressing open air meetings I used to put a mackintosh on to receive the bad eggs and rotten fish. Sometimes the chances of success for our cause seemed very small, but we went on.”

Nevertheless, the rest of the world watched Australia’s bold 1902 suffrage move with fascination, while ballsy, outspoken Australian women suffragists spread their wings. Indeed, the first woman to make a speech in the British House of Commons was Australia’s Muriel Matters. A radical women’s activist, Matters was not invited to speak but in 1908 chained herself to a grille and used her thespian skills to project across the chamber, calling for the right for British women to vote.

After years of violence, imprisonment and radical action by suffragettes the United Kingdom, along with Ireland and Denmark, elected their first female parliamentarians in 1918. Norway appointed its first woman MP the year before. But in the global race towards women’s political empowerment Finland won hands down. Following universal full suffrage in 1906, Finland elected an astonishing 19 women to parliament the following year. Those women became the first female MP’s in the world.

By the time Lyons and Tangney strode through the door of Parliament and into their seats, a total of 27 countries had surpassed Australia and already elected or appointed women to their national parliaments. The United States had 10 women in Congress. In the same year New Zealand elected 4 women to Parliament, and Winston Churchill had two women in his War Ministry.

Contrastingly, until 1996 Australia only ever had one woman in Cabinet at a time. Which is perhaps why it didn’t seem unreasonable to Prime Minister Tony Abbot to include just one woman in his 2013 Cabinet, whilst acknowledging that perhaps there were a couple more “knocking on the door.” This sat in alarming contrast to Canada’s new PM, Justin Trudeau, who only two years later appointed a 50/50 gender parity Cabinet, and when asked why he wanted half his Minister’s to be women simply said, “Because it’s 2015”.

“Yes, things have changed. Some things are a lot better. But many are still bad. And they are connected – the bad is the backlash to the good. Women’s advancement has set into motion vast changes that inspire feelings of all kinds. Some of us are exhilarated. Others feel a whole lot of rage.”

Sadly, frustratingly, such a question is too easily answered. We only need three fingers to count the nations out of 193 who meet or surpass a 50/50 gender representation in parliament. Rwanda has 61 percent women in its national parliament; Cuba and Boliva both have 53 percent. From there women score below par representation for the remaining 190 countries. Only Belgium has reached a 50 percent gender split in an Upper House or Senate, with Mexico and Bolivia both just one seat away from parity. Although hard to fathom, women in the oil rich Sadia Arabia were only given the same voting rights as men in 2015. That leaves the Vatican as the last sovereign nation on earth to still fully and exclusively deny women the right to vote. It seems no amount of  “because it’s 2018” appears to wash with those holy men of God.

Around the globe a total of 23.3 percent of national parliament seats are held by women, with only 18 percent of Ministries headed by women.

But again, perhaps most shamefully and despite that ‘early adopter’ advantage, Australia sits well below the front runners.

As of September 2018 the International Parliamentary Union ranks Australia 50th in the world on its Women in National Parliament tally. We sit just above South Sudan and just below the Philippines.

With only 28.7 percent of seats in the House of Representatives occupied by women, and 6 out of 23 Cabinet posts, an increasing number of Australian women are calling for institutional interventions: be they gender quotas, targets, party preselection rules, or electoral reform.

Whilst formal instruments such as quotas, in one form or another, have been used effectively in all nations that have significantly improved the political participation of women in the past decade, here in Australia the call for parliamentary gender quotas has been met by a conservative clutch at the kind of patriarchal norms that once insisted women’s “purity, delicacy and refinement” would be at risk if they were given the vote.

The modern day pushback against parliamentary quotas – which suggests women will become ‘token’ appointments, devoid of merit – echoes the 19th Century petition by South Australian women who were against women’s suffrage. Those quaint dears firmly opposed women’s political participation “Because the duties and life of men and women are divinely ordered to be different both in the State and in the home.”

Highly developed, sophisticated democracies like Australia like to pat themselves on the back, but the goal of genuine representation embodied in the very name of the legislature, the House of Representatives, eludes us. Indeed the continued structural disinclination to elect women in anything even close to the proportion they represent in the population, has made a mockery of universal franchise. The 1902 removal of rules prohibiting women from voting and running for parliament, has turned out to be only the preliminary stage. Deeply embedded cultural factors, which are not susceptible to legislative instrument, have proved to be an even stronger bulwark for the defence of patriarchal dominance

Disturbingly, our recent research at the 50/50 by 2030 Foundation (IGPA), University of Canberra reveals a large percentage (42%) of Australian men fear they are “excluded from measures to improve gender equality.” The same survey found that while 3 in 5 women believe “it is important that more women become leaders”, less than half the men surveyed (43%) felt women’s leadership was important. On the flip side, when asked to identify the most sexist areas of society – an overwhelming 58 percent of Australians rated politics the place where “sexism is most widespread in Australia.”

So, while Australia is a long way off laying to rest the gender lie conveniently hidden in the name – House of Representatives – how well is the rest of globe faring in the gender stakes?

The United States saw its first woman elected to parliament in 1917, but has struggled ever since to increase the representation of women. The USA is currently rated by the IPU at 103 out of 193 nations for Women in National Parliaments. The United Kingdom on the other hand sits above Australia at 39/193, with 32 percent of seats in the House of Commons held by women, and a concerted push underway to commit Parliament and Local Government to a 45 percent female quota by 2030.

Back closer to home, Australia has the unenviable reputation of sitting in the worst region in the world for women’s political participation. Three out of the four nations with no women MP’s are our near neighbours: Papua New Guinea; Vanuatu; and Micronesia.

Around the world there are currently 10 women Heads of State, and 2 reigning women Monarchs (UK and Denmark). A total of 11 nations have a female Head of Government. Whereas once Australia boasted both at the same time – with Dame Quentin Bryce our first female Governor General in 2008, and Julia Gillard Australia’s first female Prime Minister in 2010 – the ‘early adopter’ Antipodean nation now seems a long way off such a double act. Currently New Zealand and the United Kingdom are the only nations to have women as both Head of Government and State.

While NZ’s Prime Minister, Jacinda Ardern, made global headlines over giving birth whilst in office, and most recently for being the first world leader to take her baby into a United Nation’s General Assembly meeting, these ‘firsts’ are as fascinating as they are far-fetched.

With over 3 billion women inhabiting the planet, the fact that one has finally cracked through once unimaginable gender barriers remains an utterly extraordinary feat, and far from ordinary. When women in the top political seat, with babies in tow, are no longer global headlines, but an uneventful norm, only then can we say … our Houses are truly ‘Representative’.

Virginia Haussegger AM is a passionate women’s advocate, journalist and communication specialist. She has reported from around the globe for leading television current affair programs and in 2014 was made a Member of the Order of Australia (AM) for service to the community, as an advocate for women's rights and gender equity, and to the media. Virginia is Director of the 50/50 by 2030 Foundation at the University of Canberra’s Institute for Governance and Policy Analysis (IGPA), and Chief Editor of BroadAgenda.